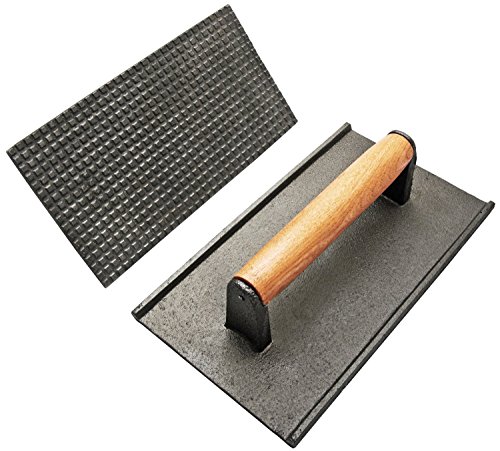 The Many Pros of a Bacon Press

Cast iron bacon presses have so many more uses than only for cooking bacon perfectly. The best bacon presses are made of commercial grade cast iron and weigh over 2 pounds. This gives weight to the product for great cooking. Make sure and buy a cast iron bacon press that has a wooden handle. If you get one with a cast iron handle, it heats so hot that you likely will burn your hands on it even when using heavy duty grilling gloves to touch it. The first step in using a bacon press is to season it properly to get the best results in all of your dishes.

If you just throw bacon in a hot skillet and cook it, you will end up with burned meat and a lot of fat. There are actually some steps that help with the cooking process.

Choose a skillet that is large enough so that when you place your bacon strips in it, they are not overlapping or overcrowded. Take your bacon out of the refrigerator and leave it on the countertop for about 15 minutes before you start to cook it. This helps the fat to render more quickly than if the meat is cold and it starts out at the same temperature as your pan. The best skillet of choice is a cast iron skillet for the best results on your lovely breakfast meat. Place your room temperature bacon in the skillet and then put the pan on your stove and turn the burner to medium low. Place your bacon press on top of the bacon slices.

The weight of a cast iron bacon press depresses the bacon out flat in your skillet for even cooking. Your finished product is very crispy and it does not curl, but remains entirely flat. Flat bacon fits better on sandwiches, to top dishes with and it is much easier to cut into bacon bits because it is flat.

Cast Iron Bacon Presses are a Winner in the Kitchen

The weight and durability of cast iron is always a winner in any kitchen. If you place your bacon press on any type of meat you are cooking, it can replace those expensive indoor grills that drain the fats off meats. The wooden handle allows you to press downward as your meat sears in a pan and is about halfway done to release the fat. You need only lean the pan and drain away the grease for a healthy alternative in your cooking.

A bacon press can replace a tortilla press, which can also be quite pricey. Place a piece of plastic wrap on your countertop that is approximately the size of your bacon press in width. Cover the dough with another piece of plastic wrap. Place the bacon press on top of the enclosed dough and press it down using the wooden handle. This will make your homemade tortillas uniform in thickness for the best culinary experience.

You can also throw out that Panini press that you got as a gift and you never use because it can be a pain to clean it. Preheat your cast iron skillet over medium heat and place the bacon press in the pan to preheat as well. Build your sandwich, place it in the pan and put the bacon press on top. Leave the sandwich in the skillet until it is golden brown on both sides.

Heating a bacon press on your outdoor barbeque grill before quick cooking meats and putting it on top of the meat allows both sides of the meat to cook at the same time. There is no need to turn the meat and it cooks twice as fast.

Hash browns are a good dish to try out your bacon press on. Heat a small amount of oil in a cast iron skillet on medium high with the bacon press inside the pan to preheat it as well. Place your potatoes in the pan and add the heated bacon press on top. Both sides become crispy and brown at the same time with no flipping needed.

The Only Cons of a Bacon Press

The only drawback to using a cast iron baking press is that after  a long period of time you may need to re-season it. It is best to store it in a dry area with a very light coating of oil on it to keep it seasoned. Some users place paper towels in a shallow pie pan and place the press standing upright with the handle pointing up on the paper towels to keep the press oiled.

If you have something stuck on your bacon press, pour kosher salt on it and rub it with a kitchen towel until the food comes off. Don’t actually wash the press with detergent or dish soap and never scrub it with any type of scouring pad. These tips will help your cast iron in tiptop shape for many years to come.

Will Hanke is a self-proclaimed cast iron nerd that loves to cook for his family, enjoys spending time in his kayak, and run his three favorite websites - Cast Iron Freaks, FloatMissouri, and Red Canoe Media

The History of Lodge Cast Iron and Their Logo
March 29, 2017

All About Pre-Seasoned Cast Iron Cookware & Re-Seasoning It
March 21, 2017